New York Mets first baseman Pete Alonso stands mouth agape, bat resting by his side, one finger pointing in the air to celebrate a home run. This six-inch-tall Alonso never moves from this position, aside from when his oversized head wobbles up and down. The Pete Alonso bobblehead is one of 25,000 that were manufactured last year by BDA, a Seattle-based sports merchandise company that makes promotional items for all 30 Major League Baseball organizations.

The giveaway figurines would have been gifted to fans at a Mets game in March, but the first four months of Major League Baseball's schedule were canceled due to Covid-19--and even when the season began in late July, no teams could admit fans, so the bobbleheads went unused. It's unclear how many people will be able to attend games when the 2021 season begins on April 1, but BDA has been storing nearly 5 million pieces of merchandise on behalf of MLB--from jerseys to magnets to tote bags--until the teams figure out what to do with them.

"The sports industry got hammered last year," says BDA co-founder and CEO Jay Deutsch. "The teams are really looking to make this year special for the fans and trying to get things back to normal--and I'm using air quotes when I say 'normal.' " 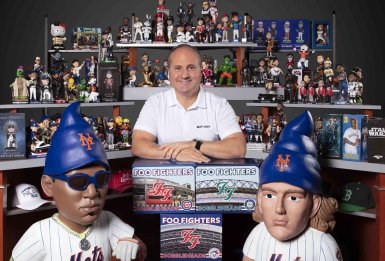 Some teams found creative solutions. The Mets contacted season ticket holders and allowed them to pick up bobbleheads at the stadium. Others mailed items to fans, held public giveaways, or, for clothing items, donated them to charity.

Many MLB teams have beefed up their promotional offerings in recent years to draw patrons. It seems to help: While the Mets's home of Citi Field sat half-empty during many games in the pre-Covid era, lines of fans snaked around the stadium hours before game time on the days when the team gave away bobbleheads. The Chicago Cubs found that 71 percent more fans entered the stadium in the hour before first pitch on bobblehead days--and more people inside means more food, drink, and merchandise sales, making BDA's giveaways even more attractive to teams.

Deutsch had no idea his company's products would be so essential to the big leagues when he and his childhood friend Eric Bensussen founded the company in 1984. The two teens, who grew up a few houses apart in Washington State, noticed that fans were flying in from Alaska to attend Seattle Seahawks games. They called the NFL and asked for permission to stamp the team's logo on a sweatshirt that declared the Seahawks "Alaska's Team." The league agreed, and the friends manufactured the apparel and sold it through local retailers.

Today, BDA has [over] 700 employees and annual revenue of nearly $500 million. In addition to Major League Baseball, the company has merchandise deals with the NFL, NBA, NHL, and Major League Soccer. It works closely with teams to create their annual promotional schedules and design their products--and, in the case of bobbleheads, it paints each item by hand.

Despite the decline in its sports business, Deutsch says the company's overall revenue remained flat from 2019 to 2020, thanks to a growing video game accessories unit and non-sports merchandise clients like FedEx and Home Depot.

Now the firm is strategizing with MLB teams on their promotional schedules for the upcoming season. Complicating matters is the fact that the organizations are still awaiting guidelines from the league and local governments regarding fan attendance. Deutsch says many franchises are considering stacking their promotions in the second half of the schedule in the hopes that stadium capacities will increase throughout the summer. Thanks to the leftover inventories from last year, Deutsch sees scenarios in the latter part of the season in which the teams give away bobbleheads every night for a week straight.

"There's pent-up demand [to attend games], but the teams are taking nothing for granted," says Deutsch. "They want to say 'thank you' to the fans for coming back. They want to reward them for the loyalty."