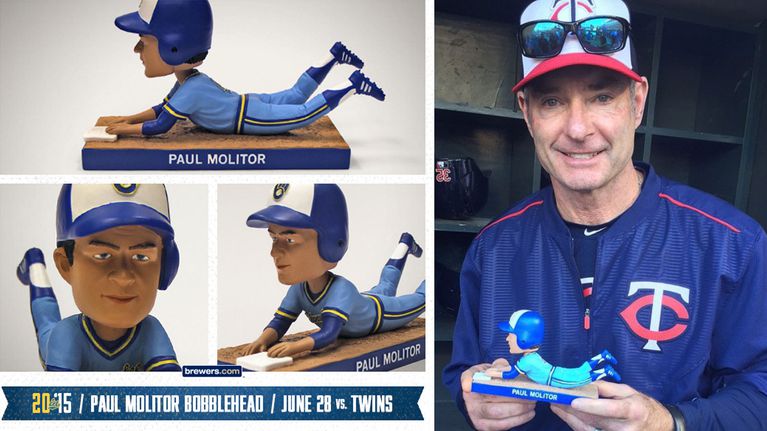 It’s been said that Enlightenment takes a thousand lives, but Insight is available to anyone, right now. For some years, I would experience the occasional sharp flash of Insight, and fantasize for a moment about someday discovering a sort of Grand Unified Theory that would explain Everything.

I did finally realize that upon my corporeal demise, I’ll be little closer to explaining Everything than when I was a small boy. There’s just too much to learn, and not nearly enough time to learn it. Not in one life, anyway. Maybe a thousand.

Then there are bobbleheads.

Last Sunday afternoon in Milwaukee, nearly 40,000 fans showed up at Miller Park to see the Brewers host the Minnesota Twins. Every one of those fans received a Paul Molitor bobblehead.

Three nights earlier in Detroit, around 40,000 fans showed up at Comerica Park to see the Tigers host the Chicago White Sox. Of those roughly 40,000 fans, only 10,000 received a Victor Martinez bobblehead.

Every major-league team features dozens of giveaway promotions every season. Almost every team gives away bobblehead dolls. Every team’s director of promotions thinks about the same things, worries about the same problems, attends the same conferences where best practices are discussed. And yet somehow there are five teams – the Astros, Cubs, Twins, Tigers, and Rockies – who give away only 10,000 bobbles, and four teams that give away something like 40,000; the Brewers, Phillies, and Red Sox guarantee bobbles to every fan, while the Dodgers hit 40,000 on the nose.

What does it all mean? Looking for some insight, I spoke to high-ranking executives with five teams: the Brewers, the Dodgers, the Tigers, the mid-range Mariners (20,000 bobbles per giveaway) and another of the teams that gives away only 10,000. Just because I didn’t understand, and wanted to.

I began with the Brewers and Chief Operating Officer Rick Schlesinger, because they’re probably the bobblehead lover’s dream team: lots of giveaways, and they give away lots every time.

For the Brewers, it all began in 2003 with … Paul Molitor. They were planning to give away 15,000 Molitor bobbleheads in August. Schlesinger was new on the job, and in a meeting he said, “Why not give every fan a bobblehead?”

“We went around the room,” he says, “getting everyone’s opinion. Our head of ticket sales said, ‘I think I can sell an additional 10,000 tickets if all fans get one.’"

Well, that’s stop and think about that for one Milwaukee second…

Back in 2003, a ticket for a Brewers game averaged around $15. Probably a little more, but let’s say $15. An additional 10,000 tickets would have meant approximately $150,000 in ticket revenues alone, plus some significant increased revenue from concessions. So let’s say the Brewers made an extra $200,000 that afternoon from tickets and concessions.

Yes, the math’s not really quite as simple as all that. But it sure looks to me like the Milwaukee Brewers just cleared $110,000 and made an “extra” 25,000 fans happy.

And we haven’t even mentioned dynamic pricing. When the Brewers give away bobbleheads now, they can bump up ticket prices by a few bucks. And now you’re really talking about a net gain.

“You have to attribute that to the bobblehead,” he says. “After Molitor, we’ve done all-fans bobbleheads ever since.”

Now, you might be thinking the Brewers are somehow unique; that they must do things like this to attract fans while playing in a relatively tiny market. But the Twins play in a similar sort of market, and they give away only 10,000 bobbles. Meanwhile, the other “all-fans” teams – the Red Sox and the Phillies – hardly have to worry about selling a few extra tickets.

And then you’ve got the Dodgers. They don’t guarantee a bobble for every fan, but giving away 40,000 does mean, considering how many fans show up in the second or third inning, that if you’re there for the first pitch you’re practically guaranteed one.

According to Erik Braverman, the Dodgers’ VP of Marketing and Broadcasting, “Our goal is to take care of everyone…

A number of teams look at the metrics and revenue and return-on-investment, considering the dollars to create the item. If the answer is no, they’ll make the financial bottom-line decision.

The Dodgers don’t look at it that way. We look at the long-term value for each fan. The better your item is, the more disappointed the fan is if they don’t get them. And we look at the lifetime value of each fan.

You might guess that this organizational philosophy came in when Frank and Jamie McCourt went out, but it was already in place when Braverman joined the Dodgers in 2009. “This wisdom,” he says, “has been shared through the ownership changes.”

Remember about the Brewers ordering 45,000 bobbleheads, even though Miller Park’s got only 42,000 seats? What’s more, all those bobbleheads don’t guarantee a sellout; they only figure to make it closer, especially in a down season like this one. So what happens to all those extra bobbles?

“We use them for charitable purposes,” Rick Schlesinger says. “Players will take them to events at the schools, and the kids love it. Just a great item to give.”

My next phone call was to Bensussen Deutsch and Associates (BDA). Headquartered in suburban Seattle, BDA supplies essentially every bobblehead that will be given away in a major-league stadium this season. Along with along with the t-shirts, garden gnomes, and other bric-a-brac. But as BDA’s Steve Avanessian told me, “People ask me all the time, ‘What’s the next bobblehead?’ And I say, ‘It’s the bobblehead.’ There is no substitute for the bobblehead.”

So why all the different answers? Obviously, BDA would be thrilled if every team followed the Brewers’ and Dodgers’ practices: lots of giveaways, and lots given away. Still, Avanessian does his best for the stingier clubs.

“Teams set precedents,” he says, “for a certain level of expectation. With the Brewers, bobbleheads have become an archetype for all fans. But with smaller numbers, you create a higher sense of desirability and collectability, and encourage people to get to the ballpark earlier.”

“There’s a matrix that every club uses,” he continues, “and I don’t think that cost is the biggest reason. The No. 1 metric is making sure that fans are excited about coming to the ballpark and what they received. It’s a combination of data-driven and institutional history.”

Okay. Time for the tough ones, and Eli Bayless, the Tigers’ Director of Promotions & Special Events, was kind enough to speak to me. Bayless has been with the Tigers since 2002, and he’s held his current post since 2008.

"Bobbleheads are great," he says. "It’s hard to put it any other way. They’re player-centric, and they’re all about the team. Kids love ’em, older fans love ’em."

"It’s a value thing for us," Bayless says. "We’ve got a promotional budget, and we’ve gotta spend it across the entire season. This year we’ve got 34 different giveaway dates. For us to do all 34 days – for the fans to feel good about coming to the ballpark every day – we’ve found that 10,000 bobbleheads is the number that allows us to do that."

Finally, I spoke to one of Bayless’s counterparts with another club that gives away a relatively small number of bobbles. Off the record, he told me roughly the same thing. In September or October, the budget for next season’s promotions is set, which includes forecasts of ticket sales, TV revenues, sponsorships, etc.

"So it’s a big number I get," he says, "and I have to spread that across all our events. We’ve typically got 65 or 70 ‘activation days,’ including 28-30 physical giveway items. And we’ve found that 10,000 for all our giveaways is the sweet spot, with the most people motivated to get it. That number also makes it more collectable, drives fervor."

What do I think? What sort of insights have I gained?

One, I think that bobbleheads are the one giveaway that fans will be most excited about, and are mostly likely to keep for many years, even sometimes as family heirlooms. There are only a few thousand of this bobblehead, and they’re not making more of them. Ever.

Two, I think it’s practically manifest that BOBBLEHEADS FOR EVERYONE essentially pay for themselves, especially with franchises that aren’t routinely selling more than 30,000 tickets for a weekend game. I think they probably pay for themselves no matter the team, considering dynamic pricing and general goodwill.

And three, I think we return – as we so often do – to The Fundamental Question: If we weren’t already doing it this way, is this how we would do it?

Steve Avanessian mentioned “institutional history,” and I can’t help thinking that so many teams are so stingy with their most popular promotion because … well, because they’ve always done it this way.

Or not. One source told me the Padres and Pirates used to guarantee bobbles to all fans; this year the Pirates are down to 20,000 and the Padres don’t have any at all!

Finally, then, what I think is what I think about almost everything that happens in the major leagues: Everything comes from the top of the organization, because so much is unquantifiable that one can justify nearly any decision. Which leaves the big stuff to the ultimate decision-makers.

Can you put a price tag on “the lifetime value” of each Dodgers fan? Actually, you could. It would be one hell of a Wild Ass Guess, but you could do it. What you couldn’t do is come up with any sort of meaningful estimate of how that value is affected by a single Davey Lopes bobblehead.

Me, though? It’s not my money. I just like seeing happy people, and especially happy children. Which is why I would order not 10,000 or 20,000 or even 40,000 bobbleheads for every giveaway. I would order 50,000 every time, and then I would have a great deal of fun giving away whatever was left after the game. Gives me a warm feeling inside right now, just thinking about all those little bobbing heads and all those big gap-toothed smiles.