BERKELEY, Calif. —  A forklift waited in the tunnel of Memorial Stadium when the large truck arrived Wednesday morning, carrying perhaps the most anticipated collector's items in California football history.

The forklift worked with precision, lifting massive boxes out of the truck and wheeling them to a storage room in the bowels of the stadium. Utmost care was necessary: After all, this was former Golden Bears great Marshawn Lynch making a return to his old digs, this time 10,000 strong, in bobblehead form. 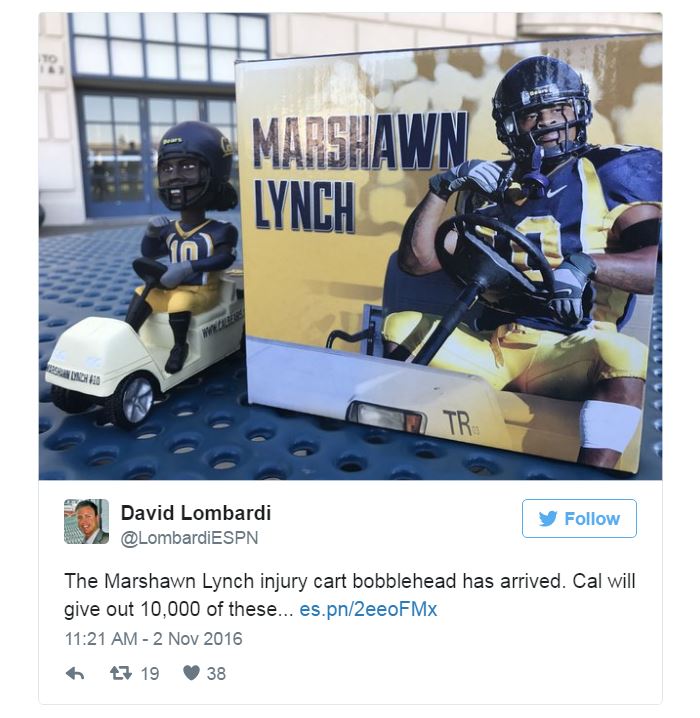 This isn't the typical bobblehead, either. It's a detailed replica of Lynch's joyride on an injury cart after the Bears' overtime victory against Washington in 2006.

"I've had more text messages and phone calls about this bobblehead than I've had congratulations about my wedding [this past summer]," Cal inside receivers coach Jacob Peeler said. "Let's just put it that way."

Yes, Lynch will be in attendance Saturday.

The giveaway's timing is ideal for reasons that extend far beyond that. It's also the 10th anniversary of the running back's iconic antics, and No. 5 Washington is again the opponent. Plus, in the decade since the now-immortalized event, Lynch has delivered a successful NFL career, and most of it came in the Huskies' hometown of Seattle. He helped lead the Seahawks to a Super Bowl title, and there's plenty of overlap between their fan base and Washington's.

All of those factors came into consideration late last year when Cal director of ticket sales David Kao devised the Lynch bobblehead idea with Matthew Honerkamp, the Bears' senior director of development for major gifts.

"When Matt and I sat down, we needed something to showcase the strong home schedule we had coming up in 2016," Kao said. "So we thought of a bobblehead. Then we said, 'Why not a Marshawn Lynch bobblehead?' And then we said, 'Why not Marshawn on a golf cart?' Since it was the 10-year anniversary, and he just retired from Seattle, and UW is in Seattle -- everything aligned."

Kao sprung into action. He shopped for companies to produce the bobbleheads, eventually settling with Bensussen Deutsch & Associates -- which is, coincidentally, based in the Seattle metro area. The designers' first prototype arrived in late May, but as Lynch wasn't wearing a helmet in it, that one wasn't realistic enough for Kao.

"But then the second try didn't have that armband," Kao said, pointing to a band on Lynch's right biceps. "So I said, 'Hey, put that on there.'"

The attention to detail is evident in the bobblehead's final version, which accurately reflects Lynch's arm positioning during his swerving drive through on-field traffic, and even features a small Nike swoosh on his jersey.

Kao gave the green light for mass production to begin in mid-June. He says he "went all-in" with the promotional-giveaway portion of his annual operating budget. Workers in China made 10,000 Lynch injury-cart bobbleheads and sent them on their 45-day journey across the Pacific Ocean to California.

"Between designing, sculpturing, manufacturing and shipping, 10,000 was the maximum that could be done in that period," Kao said. "And I think that's a good number, because it makes it a collector's item."

When that truckload of bobbleheads rolled into Memorial Stadium this week, Kao was finally able to breathe a sigh of relief. He'd spent the previous several months worried about small details such as box design, potential delays, and even the threat of theft as the 10,000 bobbleheads waited in a Long Beach, California, warehouse after arrival from China.

"To say it's been stressful would be an understatement," Kao said.

The rest of the effort should be fun. Cal will allow fans to begin lining up for the Lynch bobblehead at 2 p.m. PT Saturday, more than five hours before the 7:30 p.m. kickoff (ESPN/WatchESPN). When gates open at 5:30, distribution of the the hyped collector's item will begin. Seven of the bobbleheads have already sold for $89 apiece on eBay, even though they haven't been released to the public yet.

"Playing at home against a top-five team is a big deal anyway," Peeler said. "But that bobblehead is the cherry on top."