» Listen to the interview. 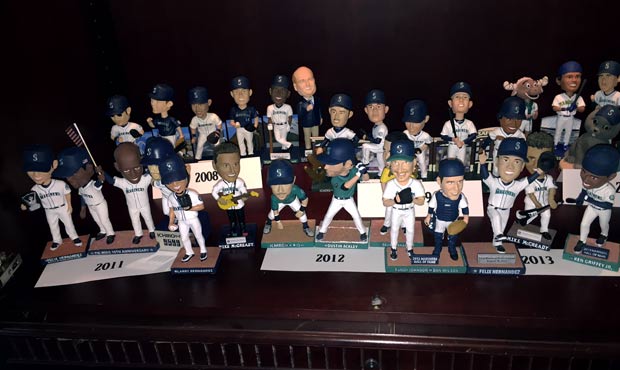 Just some of the dozens of bobbleheads created for the Mariners over the years are shown in this display at Safeco Field. (KIRO Radio/Josh Kerns)

As soon as the Mariners schedule comes out, it’s easy to determine which games will be the hot ticket.

Sure, there are the Red Sox, Yankees, and Blue Jays, but it’s the littlest guys that draw the biggest crowds.

Fans line up hours before the gates open to make sure they’re among the lucky ones to get a cherished bobblehead when the M’s give them away.

It’s been that way since their resurgence over the last decade or two.

“The early pioneers were the Minnesota Twins and San Francisco Giants who brought back the bobbleheads as a giveaway,” said Gregg Greene, the Mariners Sr. Marketing Director.

“Fans just took to them like the three-dimensional baseball cards that you get to hold and collect,” he said.

It’s clear from the collection of bobbleheads adorning his office, Greene has a special connection with the keepsakes. He and his team are the ones who come up with the new ones every year.

Along with the Jamie Moyer Hall of Fame edition, this season’s highlights have included King Felix resplendent in his royal crown, Kyle Seager in a commemoration of last year’s gold glove, and Nelson Cruz’s boomstick bobble.

“We try to highlight a lot of our different players based on accomplishments that they had the previous year,” Greene said.

He admits it’s virtually impossible to pick a favorite from among the dozens.

“Dave Niehaus &#8212 it’s nice to see him in bobblehead form &#8212 i some of the Ichiro ones when we started to take him from the pudgy form to a more athletic pose, I’m really fond of those,” Greene said.

That evolution is evident. When the bobbleheads first came back, their bodies and heads all looked pretty much the same.

A lot of the credit for that goes to Mariners marketing partner BDA. The Woodinville company is among the biggest sports merchandise firms in the world.

Their visionary co-founder and CEO Jay Deutsch and his firm was at the forefront of the bobblehead resurgence.

“So when we kind of saw this trend, we saw this opportunity, we started immediately taking it into today’s athlete,” Deutsch said.

But since then, they’ve gone far beyond. Now they’re doing things with costumes. A few have even been dressed up as Star Wars characters. They’ve even created talking bobbleheads with sound chips for some teams, although the Mariners haven’t tried one yet.

But what really captivates Deutsch is the ability to capture precious baseball moments.

“You can go back in time and create memories,” Deutsch said. “It goes back and brings fans back to remember the best of times. It’s hard to do that with a T-shirt.”

And they’re not just for the fans. Even the players clamor for their own caricature. Greene says he’ll frequently get calls from the clubhouse during bobblehead games.

“They’ll kind of sheepishly say ‘Can I get a bobblehead, can I request a few bobbleheads?’ Greene said. “I’m like, ‘Sure,’ thinking they’re going to ask for 100 or 200. ‘Yeah, it would be great if I could get six bobbleheads.’ And you’re like, ‘Yeah, I think we can help you out with that. That’s no problem.'”

Among the Mariners, King Felix leads the pack with nine different editions, including his popular alter ego Larry Bernandez. Ichiro is just behind with eight. Ken Griffey Jr. is featured on five separate models.

Planning for next year has already begun in earnest. Greene won’t disclose who might have the honor bestowed upon them. But I’ve got one idea: Rick Rizzs.

“He is as much a part of Mariners baseball as anybody in the game. I don’t know, maybe we ought to start a petition or hashtag,” Greene said.