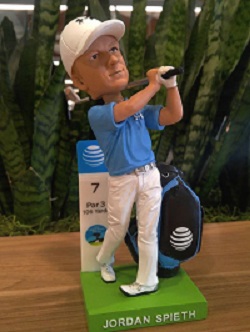 The world No. 1 lost to musician Jake Owen in a match Tuesday at Cypress Point, losing the first four holes before rallying. But Spieth came up short on the last hole when his capacity for being clutch failed and he lost 1 down. Sure, Owen, an established golfer playing off a handicap of 2, got nine shots, but still.

And a Spieth bobblehead that will be given to 8,000 spectators Saturday before the third round of the AT&T Pebble Beach Pro-Am has some thinking it looks more like Steve Stricker, Mark Brooks, Luke Donald, Peyton Manning or Eli Manning.

“I don’t know how, but somehow I think it’s even better looking than me,” Spieth said of the bobblehead Wednesday on another postcard day along 17-Mile Drive.

Yes, the loss to Owen stung and the bobble-head has led to some funny comments and tweets, but Spieth is having a blast this week.

For starters, he has tied for seventh and fourth in the past two years. He again has Owen as his amateur partner. He loves all three courses used in the tournament. The views are spectacular.

And as much as anything, the globetrotter is refreshed and ready after a tiring travel schedule that took him to South Korea, China, Australia, Bahamas, Hawaii, United Arab Emirates and Singapore since October. The trips to the Middle East and Singapore were back-to-back starting Jan. 24.

“I feel great. I feel rested now. It’s amazing what a solid week back (in Dallas), of kind of rest and regeneration will do,” Spieth said. “My (swing) speeds are where they need to be, everything feels good. It was obviously a tough travel schedule to do. … But I had a lot of fun. Two very easy places to travel to, great hospitality. A little tired in between the two events.

He feels good about his golf game, too. In his past seven worldwide starts, his worst finish is a tie for seventh, and he has two wins, including the Hyundai Tournament of Champions to kick off his 2016 campaign.

“I’m here grinding this week,” Spieth said. “This is an important event on courses that are three of my favorite courses in the world; they’re so awesome. ... Even if the rounds are a bit longer because you have foursomes, you’re still having more fun. You’re getting to kind of, in a way, feel like you’re playing a team event while still kind of grinding yourself.

“It’s hard to explain. Maybe it’s just these courses bring out the smiles in everybody.”

Spieth certainly smiles when he’s around Owen, who once had aspirations of trying to play golf for a living before music came calling.

After Spieth won five titles last year, including the Masters and U.S. Open that led to a historic run at the Grand Slam, he added another round at Owen’s charity event in Vero Beach, Fla., in December, even hitting a Happy Gilmore drive on the first tee.

The two are paired with Dustin Johnson and Wayne Gretzky for the first three rounds. They could certainly win the pro-am portion of the tournament as a team. Fun will be had, but there’s also a title to be won.

“This week, I mean it really is, it’s so unique, and it’s so much fun,” Spieth said. “I say that, obviously, because of the parings that I’ve had now the last four years. I mean, how can you not have fun?

“Jake will tell you, he’s seen me at the happiest. … A couple years ago I was tied for the lead with Jimmy Walker and three-putted at Pebble (Beach) seven times on Saturday. So as much fun as we’re having in between shots, I mean, I’m here to win this golf tournament. And if we can win it together, even better. That would be the ultimate for the week.

“But I would rather take a win and us get second than us win and me get second.”