Published in The New York Times
By Ben Shpigel 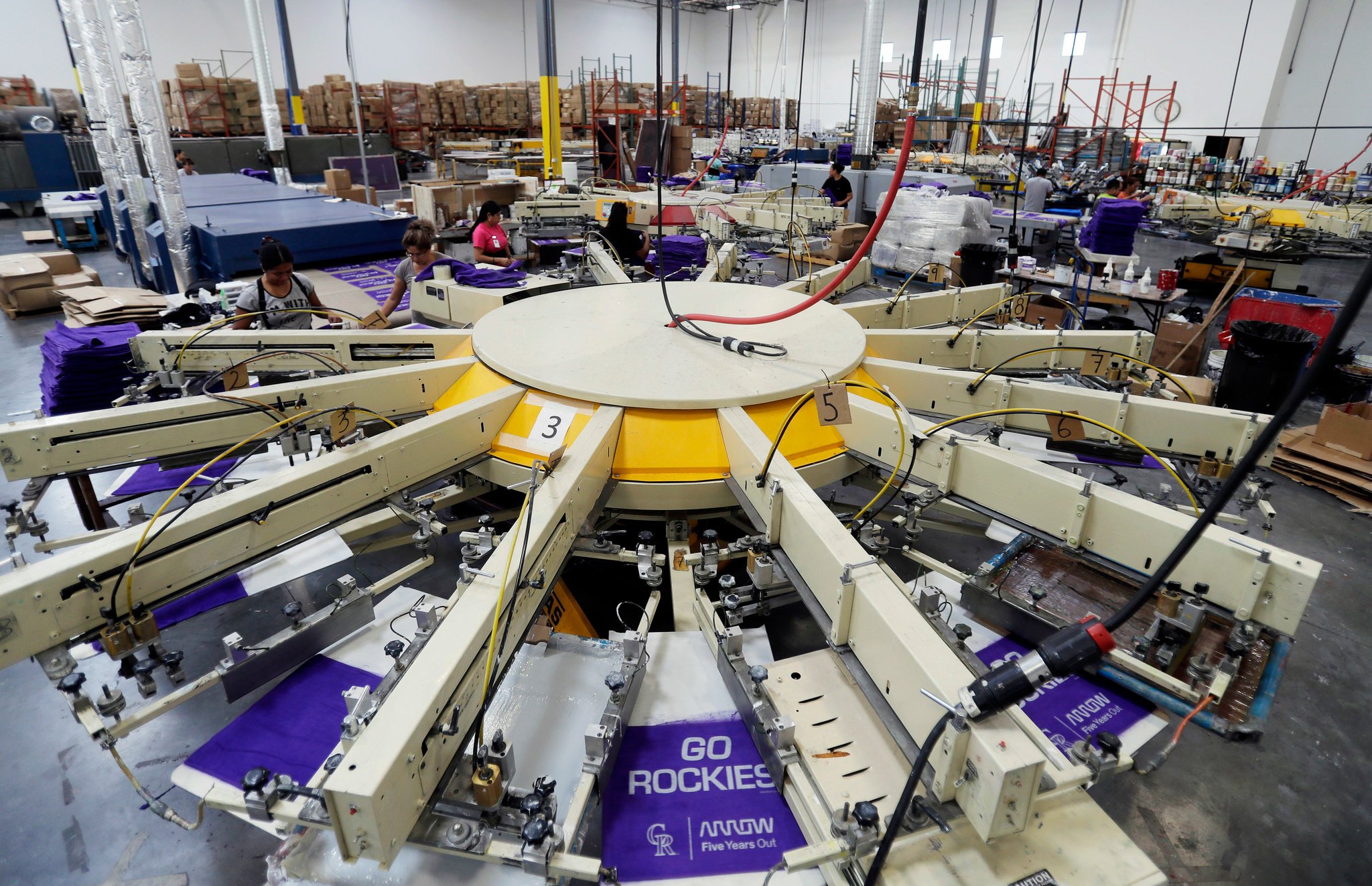 Terry velour cloth towels being decorated for the Colorado Rockies in a warehouse in Las Vegas. Bensussen Deutsch & Associates, the sports merchandising agency, is in charge of promotions for the Major League Baseball playoffs. CreditIsaac Brekken for The New York Times

WOODINVILLE, Wash. — In early September, when the Washington Nationals were soaring, the Arizona Diamondbacks were streaking and the Cleveland Indians never lost, Kerrie Ingham started getting nervous. She walked into a second-floor office here at the headquarters of Bensussen Deutsch & Associates, the sports merchandising agency in charge of promotions for the Major League Baseball playoffs, and, in her words, freaked out.

“Oh my god, they keep winning,” said Ingham, BDA’s senior director of activation. “We need to get more red towels.”

She was not worried about the early stages of the playoffs, which begin Tuesday night with the American League wild-card game at Yankee Stadium, but later rounds seemed unnerving. Anticipating deep runs by Washington and Cleveland, both division champions, Ingham placed another order.

Now there should be plenty of red towels: 1.3 million.

That staggering quantity applies to only one color. For the last eight months, Ingham and her colleagues have been preparing for this hectic juncture of the sporting calendar. They have revisited strategies, monitored standings, adjusted projections and coordinated logistics to ensure that frothing fans will have enough towels to twirl in red — or royal blue, orange, navy, gray, purple, gold or black — upon entering the stadium for each game. 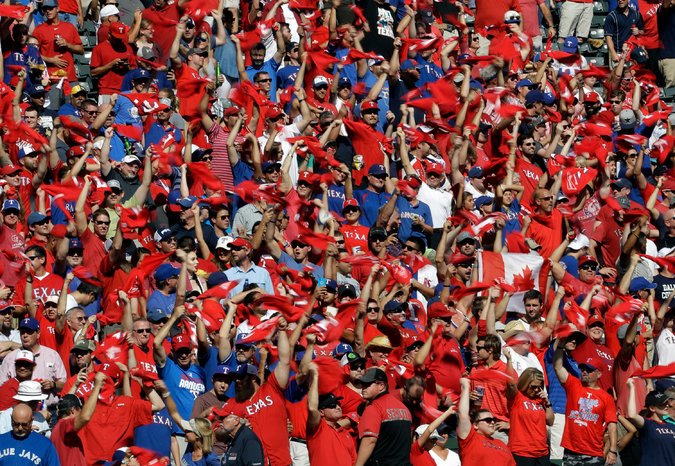 Last season, BDA accommodated the Texas Rangers’ request to switch to red towels from blue — to avoid a potential clash with their opponent, the Toronto Blue Jays. The company now encourages teams to stick with one color for the entire postseason. CreditDavid J. Phillip/Associated Press

A computer screen showed the latest standings and playoff seedings, and she yelped in excitement when Jason Fleming, a national account manager, walked in carrying updated brackets. Most of the playoff teams had been determined, diminishing the potential for late order-placing mayhem, though BDA was still communicating multiple times a day with the Minnesota Twins, who did not clinch a wild card until Wednesday, and with outsiders like the St. Louis Cardinals and Milwaukee Brewers to establish contingency plans.

To Ingham’s right, a whiteboard listed what the company has come to call a matrix. Updated frequently, it helps BDA determine how many towels, and in what color, must be provided — and from where those shipments will be coming.

The blank 15-by-18-inch terry velour cloth towels sit in warehouses in Las Vegas, Chicago and South Carolina, until teams consent to have them decorated with the approved artwork and sponsor logos. Some teams, like Cleveland and Washington, authorized their designs as early as last week. By now, teams know not to put dates or timely slogans on towels, so they can be used in another season.

In a 10-team postseason, there are 45 possible matchups, and BDA must prepare for all of them.

“You say, 50,000 of a thing must be printed and delivered to a stadium in a 48- or 72-hour period, most people would go, ‘Not possible,’” said Rob Martin, the chief operating officer at BDA. “But you figure out ways to make that work.” 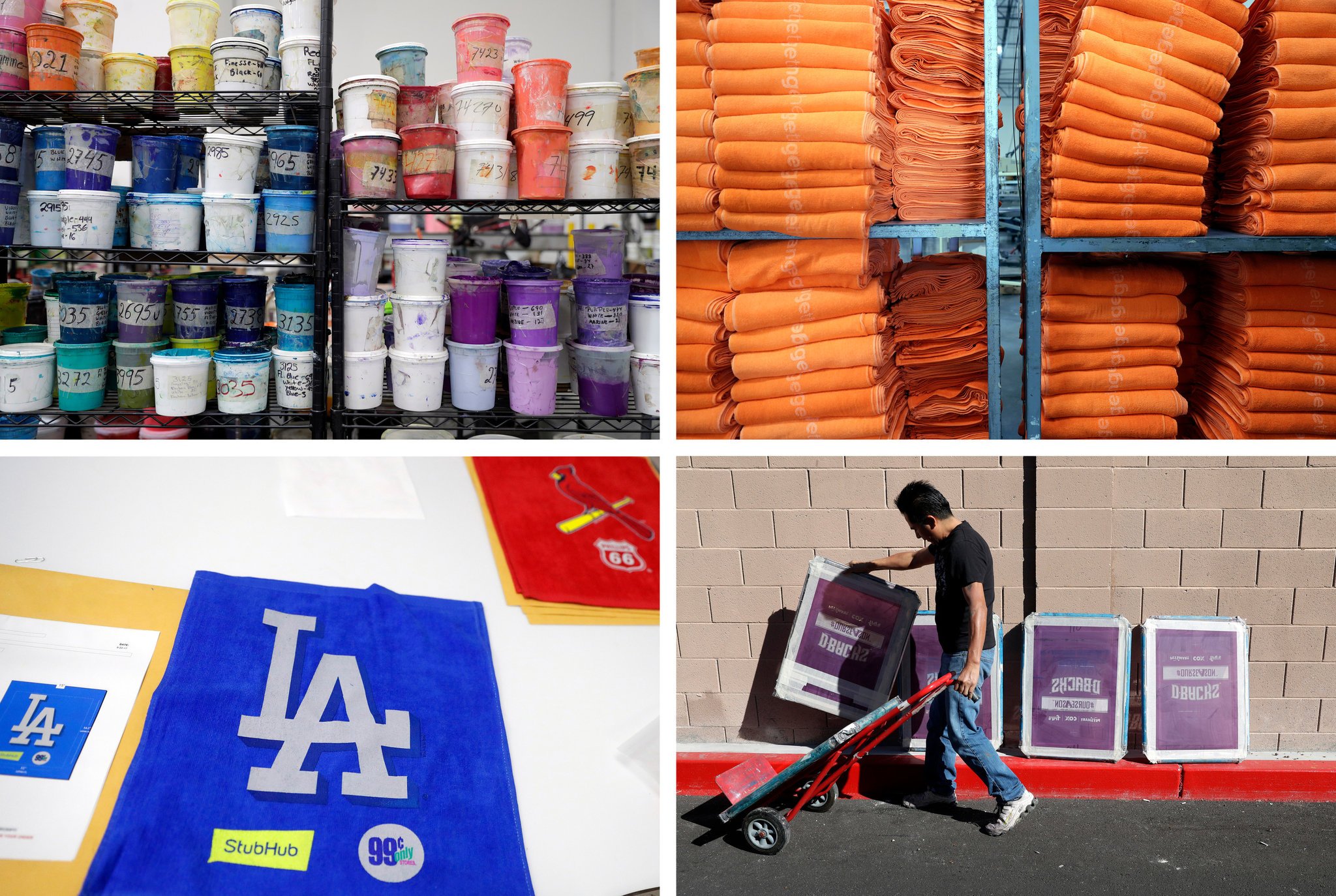 Scenes from a Pro Towels factory in Las Vegas a few days before the end of the regular season: Paints and towels sit ready for use; the design desk; Arizona Diamondbacks screens drying in the sun.CreditPhotographs by Isaac Brekken for The New York Times

One way, new for this postseason, is placing GPS units in every truck. That allows a shipment to be tracked down to the second it is delivered, but also deters any shenanigans from sinking BDA, and the team, as they nearly did in the 1992 N.B.A. finals between the Chicago Bulls and the Portland Trail Blazers.

Light-up buttons, the scheduled Game 4 promotion in Portland, were coming from a supplier in the Chicago area, but they mysteriously disappeared in the airport there before their scheduled flight to Oregon. Averting a crisis, Jay Deutsch, the agency’s co-founder, arranged for the speedy printing of 15,000 white rally towels with the Blazers’ logo and rented a Learjet to fly them up from California. They arrived a few hours before tipoff.

To that end, every truck — a 53-footer can hold up to 50,000 towels — has two drivers. They drive straight through, swapping the wheel after a certain number of hours, to shorten transit time. Twenty-four hours are allotted for delivery from the time of pickup, though trips never take that long.

To ease tension in October, BDA starts planning in January, evaluating how it handled the previous postseason. After accommodating the Texas Rangers’ switch to red towels from blue — to avoid a potential clash with their opponent, the Toronto Blue Jays — the company now encourages teams to stick with one color for the entire playoffs. 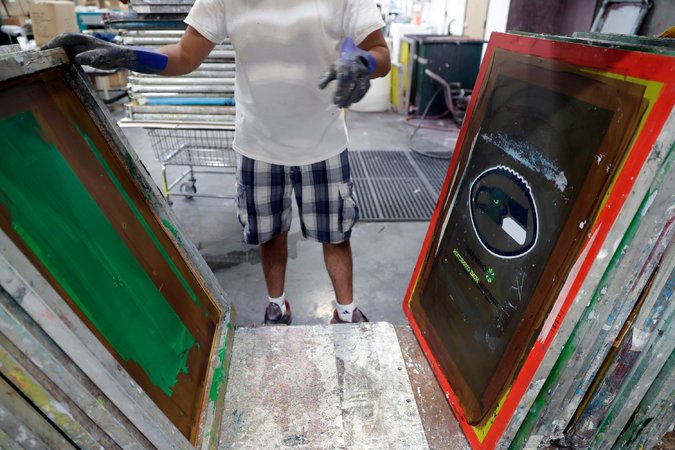 A screen for the Seattle Seahawks at the facility in Las Vegas. If there is a surplus in a particular shade of towel, it can be used in other leagues. CreditIsaac Brekken for The New York Times

As early as May, BDA checks the standings and starts projecting the inventory it must secure from Asia, where the towels are produced and dyed. That number is refined about three more times — in July, and twice in September. Even if there winds up being a surplus in a particular shade — as there was with orange last postseason when Baltimore, Houston and San Francisco reached the playoffs but did not advance to the championship series — those towels can be used in other leagues.

On Aug. 31, BDA sent a memo outlining the postseason production schedule to contending teams — about 18 in all — to notify them of ordering deadlines for every potential game. The Royals at the time lingered four-and-a-half games behind the second wild-card spot, but there could be no excuses if they squeaked into the playoffs and rampaged to the World Series, as they did in 2014.

That year, Kansas City fans waved white towels. Had their team qualified this season, they would have had fewer options. Major League Baseball no longer permits giveaway towels in the Royals’ standbys of white and powder blue, banning all pale colors so as not to impede players’ ability to track the ball.

The decision to outlaw white did not surprise teams, but it had ramifications on their budgets. Instead of paying BDA less than a dollar for each white towel, they now spend about $1.30 per colored model.

Catering to each team’s philosophies, and wishes, requires flexibility. Preserving tradition, the Yankees abstain from rally towels. Not to be outdone, the rival Red Sox will, too — for their division series against Houston, at least, a spokesman said.

But when the Astros host Boston for Game 1 on Thursday, Minute Maid Park will be roiling in orange, with 42,000 towels available for each home game. The Nationals committed to passing out cheer cards Friday against the Chicago Cubs but will hand out towels for Game 2.
Kristin Massoth, a national account manager for BDA, who communicates with the Nationals, displayed a sample of that towel — red with gray script — in her office last week. She also held out a mock-up with navy script that the Nationals are interested in using if they reach the National League Championship Series.
The real challenge might come if, as Ingham projected, the Nationals and the Indians meet in the World Series. Internally, BDA employees have grappled with the potential for an all-red World Series, and whether either of those teams would switch to a secondary color.
“Both teams would do red,” Massoth said.
“Teams are really superstitious,” Ingham said. “Once they get started on a color, they don’t want to change.”
“Oh, they definitely won’t,” Massoth said.And that is why they have 1.3 million red towels.
Follow Ben Shpigel on Twitter: @benshpigel.